As you can see on our Campaign Partners page, the national campaign seeks to engage organizations, worker safety groups, construction companies, and other stakeholders on both a national and local level. We are eager to see our partners conducting activities to raise awareness about fall hazards and protection and to educate contractors and workers on how to prevent falls on jobsites.

When we hear about a dynamic campaign that produced good results, we often create a “Success Story” – a short report with photos describing what the partner groups did and what they achieved. Take a moment to read a few Success Stories for ideas on activities you can conduct in your state or region. And if you are engaged in any activities to promote fall prevention on your jobsite or in your community, sign up to share your success story or let us know about them at falls@cpwr.com! 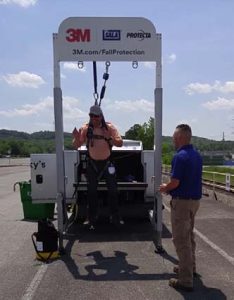 Above: A volunteer helps demonstrate proper use of a Personal Fall Arrest System.

As a company that takes safety seriously, UCOR has participated in the National Safety Stand‐Down for the last three years. In 2017, they reached approximately 1,500 employees on five different work sites, conducting a variety of activities over several days. Read the rest of this success story here (PDF). 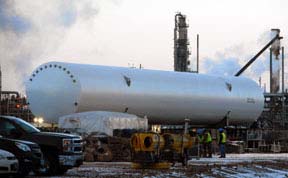 A CO2 tank is delivered to the urea plant project

Brock Services, a contractor who provides construction and maintenance services, including scaffolding, painting, insulation, shoring, lead and asbestos abatement, and fireproofing, participated in a fall prevention stand down at a urea production project near Beulah, North Dakota. Brock’s 120 employees joined other contractors at the site for an 800 person stand‐down. Click here to read more about the Brock Services stand-down in North Dakota. 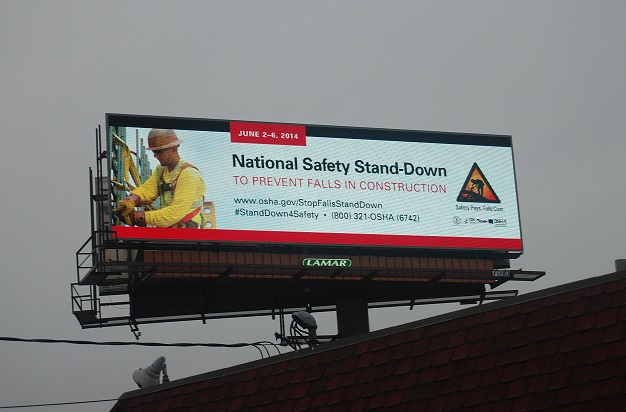 Lamar Advertising Company has generously donated national billboard space to OSHA as part of the Campaign to Prevent Falls in Construction.  Above, a billboard located in Stratford, CT displays an ad promoting the National Safety Stand-Down.

Construction managers took the lead improve worker safety in a big way: a month-long stand down to learn how to completely inspect fall protection equipment, then conduct a thorough inspection of all parts of their fall protection system. Read about the surprising results these 10 members of the Mid-Atlantic Construction Safety Council achieved, and get tips to set up a similar inspection stand down for your company.

Falls campaign partner Massachusetts Department of Health, Occupational Health Surveillance Program’s story of the fall campaign and how they have worked to reach construction workers is now available as a PDF. The Massachusetts Department of Health was able to team up with local transit to get campaign posters on buses, work with permit offices to distribute campaign information, and provide fall protection training to 350 at-risk roofers, free of charge. Read the story of their successes here.

Campaign falls poster appears on Montgomery County, Maryland Ride-On buses in March 2013, being the first public transit system to spread the word on the campaign. Thank you to campaign partner Montgomery County Government! 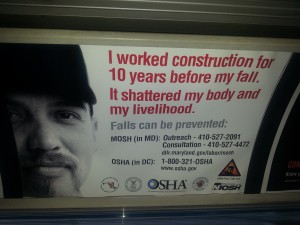 Habitat for Humanity is known for its volunteers – many with no knowledge of construction – who help remodel and build new housing for those in need. So the organization takes steps to ensure the safety of its volunteers.

CPWR Researcher Vicki Kaskutas documented the process of incorporating fall protection into the entire building process on a St. Louis Habitat project. Kaskutas tracked the director’s collaboration with local businesses and professionals, including a tool rental company, an engineer, and machine shop, then noted all solutions he implemented to construct a two-story home with basement – using fall protection in every situation that arose. Read the case study here. 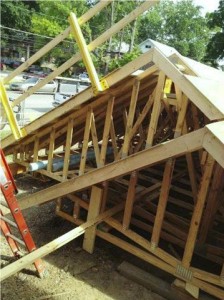 Roof on the St. Louis Habitat for Humanity was built on the ground then lifted into place with a crane. Note use of fall protection for workers finishing the roof: guardrails.

Each year the U.S. Air Force promotes an extensive Fall Prevention Focus in an effort to remind and educate all Airmen on fall prevention and risks associated with working at heights. The goal is to reduce the number of fall-related mishaps both on and off-duty. Building on past successes, the 2017 Fall Prevention Focus was expanded to include falls on the same level and ladder safety.

A Massachusetts-tailored Campaign poster appears on a subway car in greater Boston. Campaign posters are also up on regional transit bus routes throughout the state. All ad space was donated and posters will run from April – June as part of a multi-layered state-based initiative to promote the Campaign.

If you put on a successful Stand-Down and would like us to publish your story, let us know here.