Whenever possible, we have taken advantage of opportunities to evaluate reach and participation in the Campaign and National Safety Stand-Down. Based on those efforts, we have developed the following reports and stories. 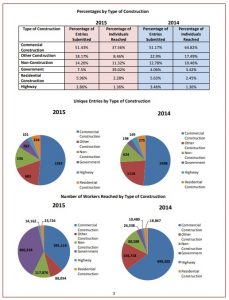 CPWR Analyses of OSHA Collected Stand-Down Participation Data – During each annual Safety Stand-Down OSHA offers certificates of participation for companies that hold their own stand-downs. Several years of that data has been analyzed confidentially and in aggregate by CPWR.

Hardhat Sticker Ordering Form Data – CPWR has been disseminating fall-related Hazard Alert Cards in the months leading up to the annual Stand-Down since 2014, as well as Stand-Down hardhat stickers since 2015. With the introduction of an online ordering form in 2017 and coordinated promotion with OSHA and NIOSH, we have seen increases in the number of orders each year. In 2019, we disseminated all 375,000 stickers we had printed, and even began sending out the artwork for companies to print their own stickers.

Success Stories – In order to highlight successful stand-down efforts and give others ideas, we have worked with individual companies to write a number of Stand-Down success stories.